More than 4,000 attendees flocked to Chicago for the 100th AAOMS Annual Meeting this week at the Hilton Chicago and McCormick Place West.

The meeting concluded Saturday with a new full-day schedule of educational sessions. The Exhibit Hall of more than 200 vendors also displayed their products and services during the final day. 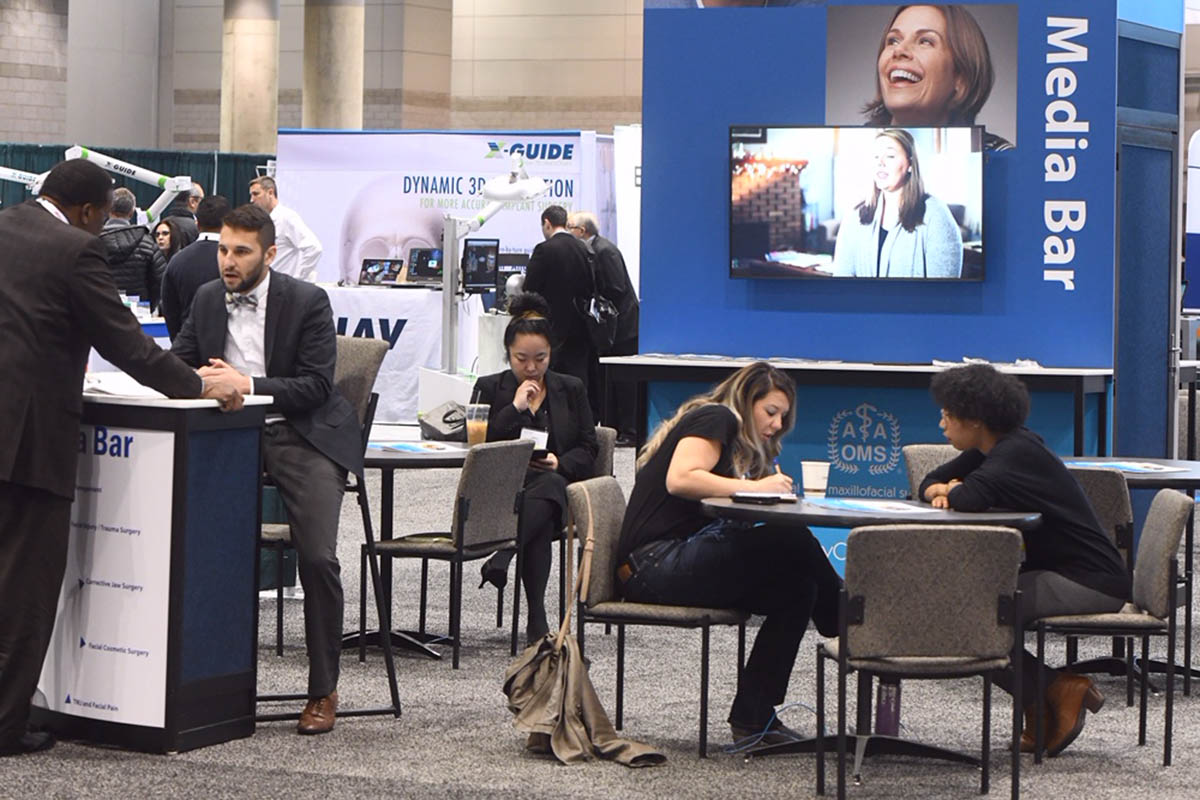 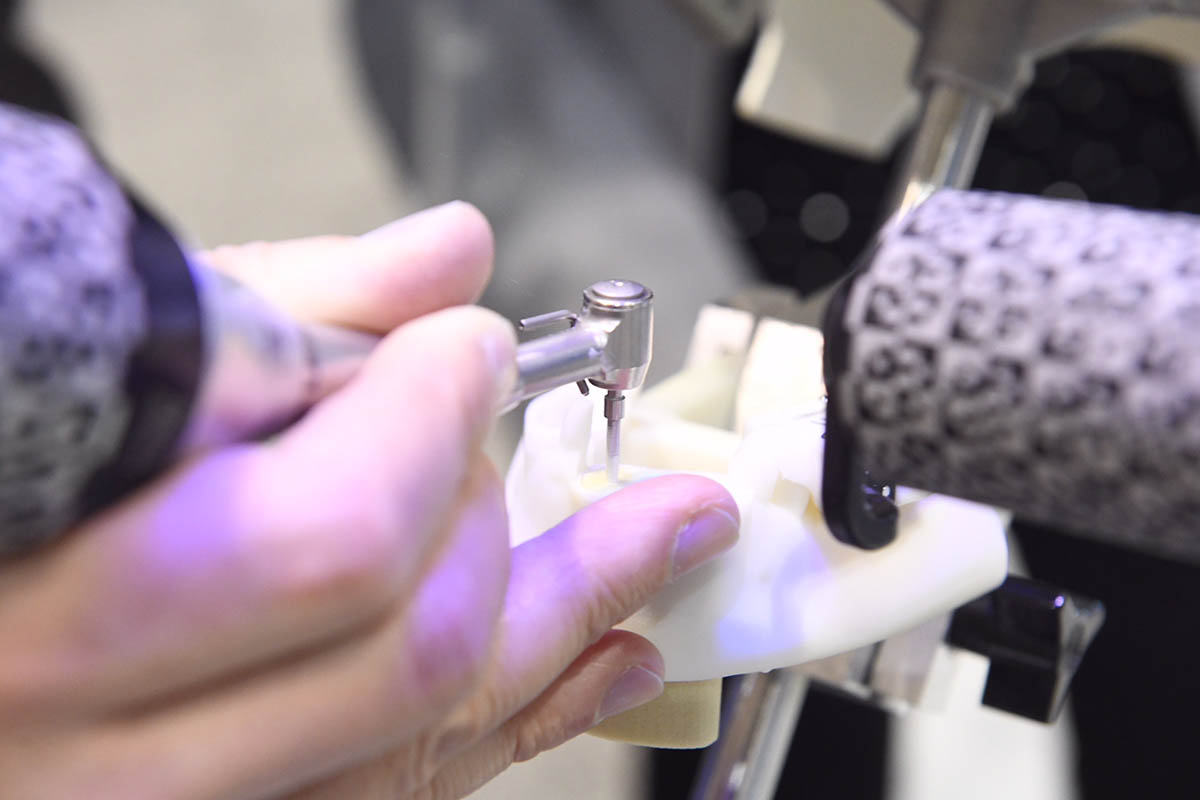 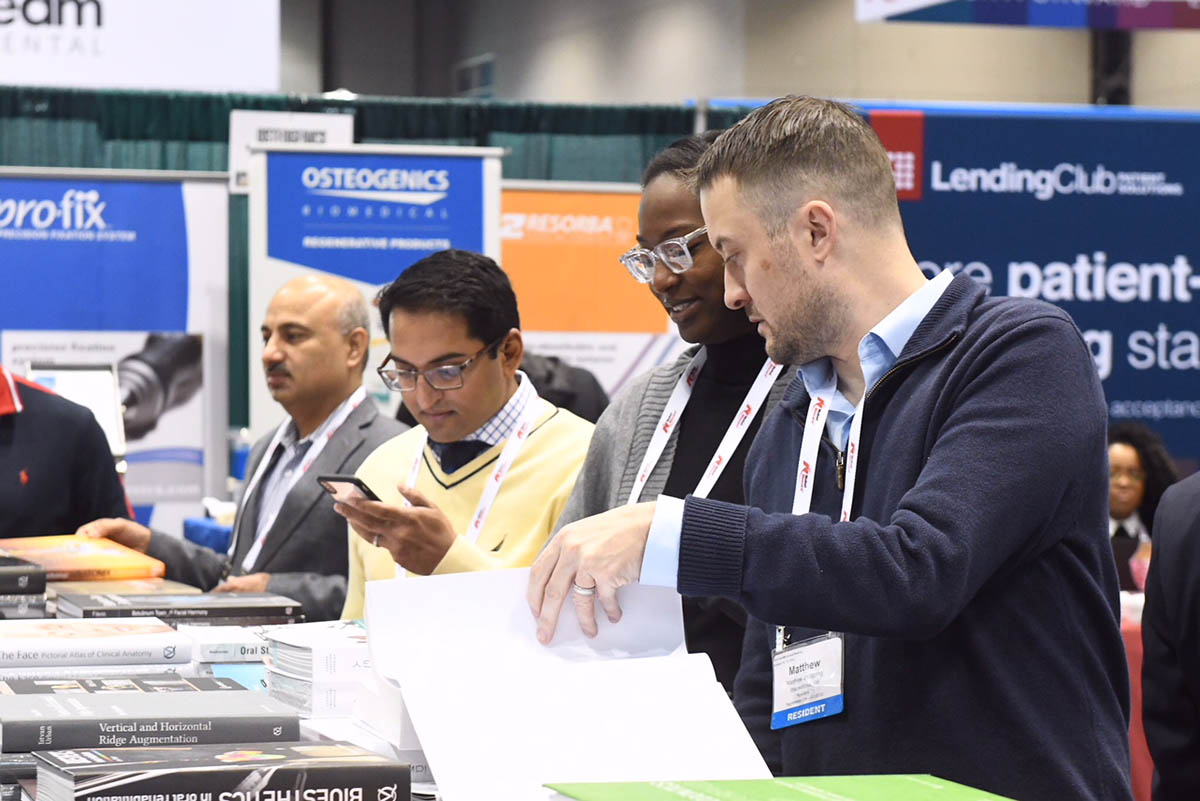 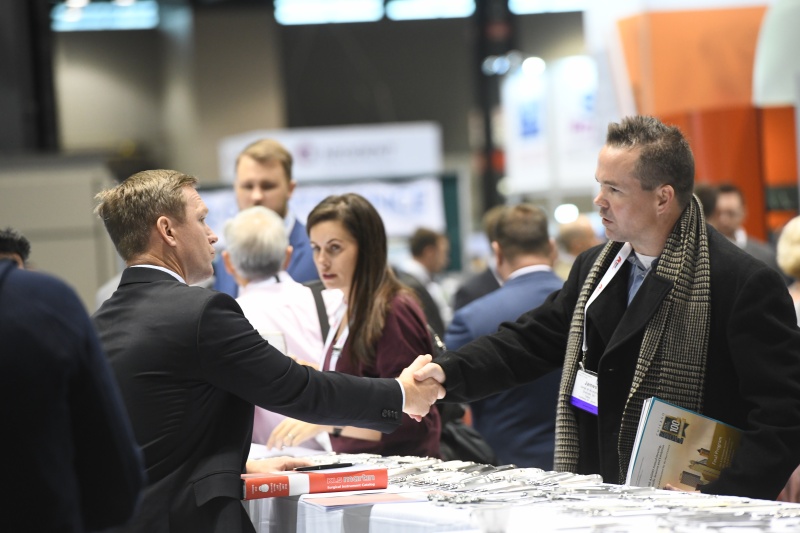 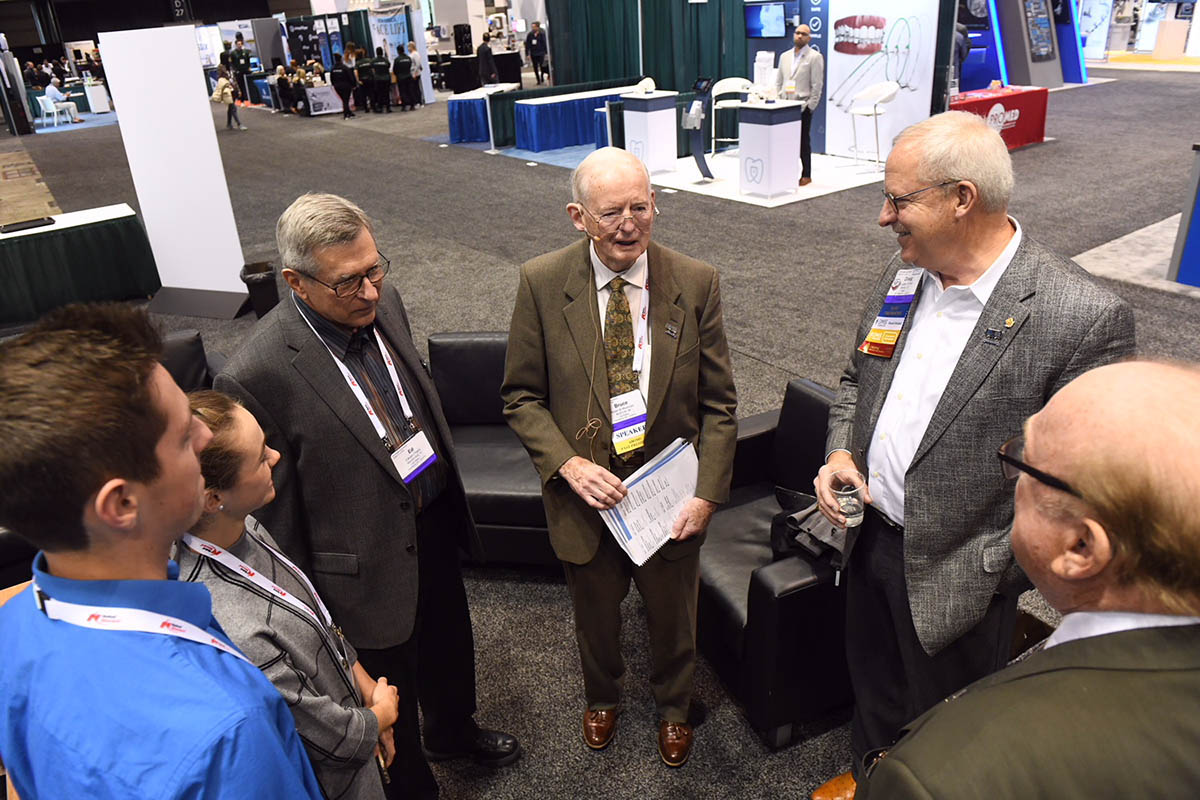 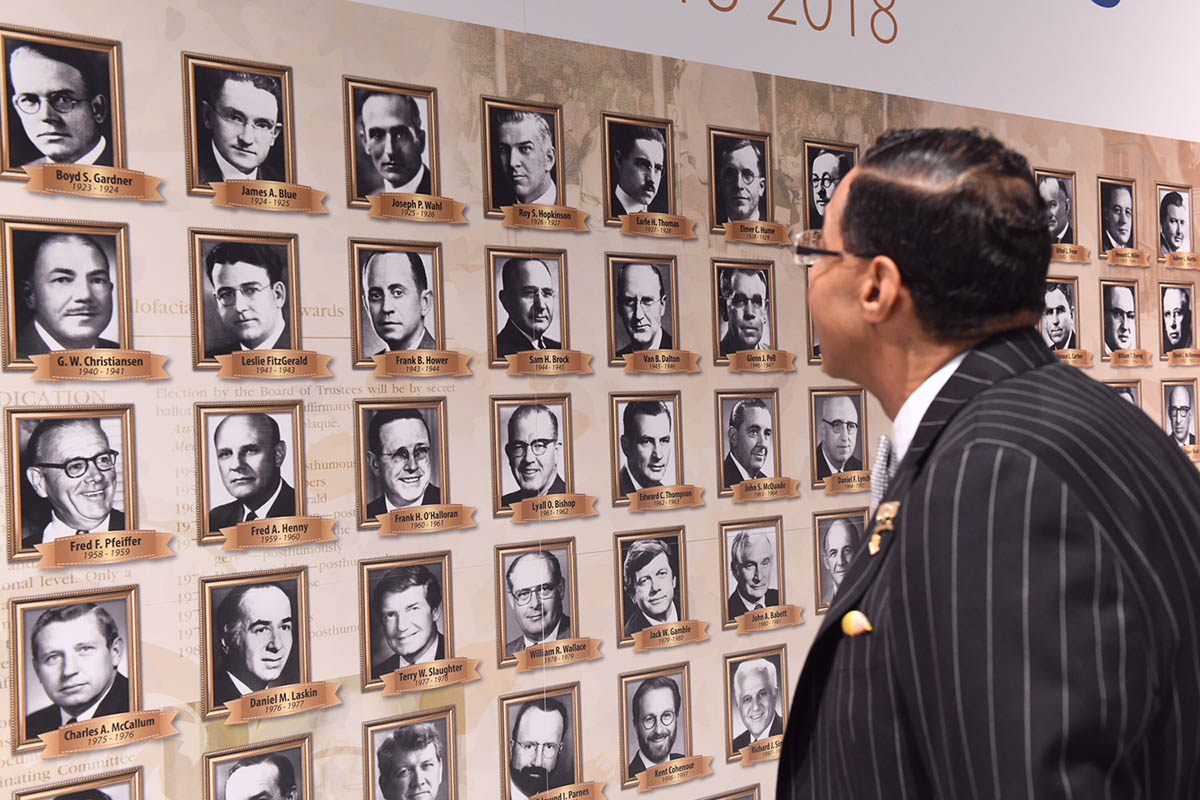 Attendees from 10 countries – including Spain, Qatar and Saudi Arabia – discussed their thoughts about how to treat oncology and deformity cases in small groups at the new World Café.

“It was really nice to collaborate with our colleagues from around the world and get a chance hear how they would do the treatment there compared to how we do it here,” said Dr. Rania Habib from the University of Florida – Jacksonville. “I’m in fellowship, so it was really nice to hear the different opinions of the more senior faculty and the more senior surgeons compared to what we would do based on training. It was very valuable.”

Attendees shared their recommendations for diagnostic workup for each case in their part of the world. Group leaders wrote down ideas from the other group members on a sheet of paper and discussed them in the session.

“It worked out very well and achieved its objectives,” said Dr. Eric Kahugu of Kenya, who is on the IAOMS executive and education committees. “It added an international feel to the AAOMS meeting. Being in a smaller forum, not one of the big plenaries, it allows for more interaction.”

Participants of the annual service project assembled 1,000 hygiene kits for the South Suburban Family Shelter. Thanks in part to an additional kit-building opportunity during the Allied Staff Reception, staff won the friendly surgeons-vs.-staff competition.

Winners of the Annual Meeting’s poster session are:

Plans are already underway for the 2019 AAOMS Annual Meeting that will be held Sept. 16 to 21 in Boston, Mass.

The tracks’ plenary sessions addressed history, the present and the future.

As for the future, “we need to continue the movement for expanded scope in oral and maxillofacial surgery,” Dr. Helman said. “We have to have more effort put into research and innovation. We have to increase our national and international activity and visibility.” 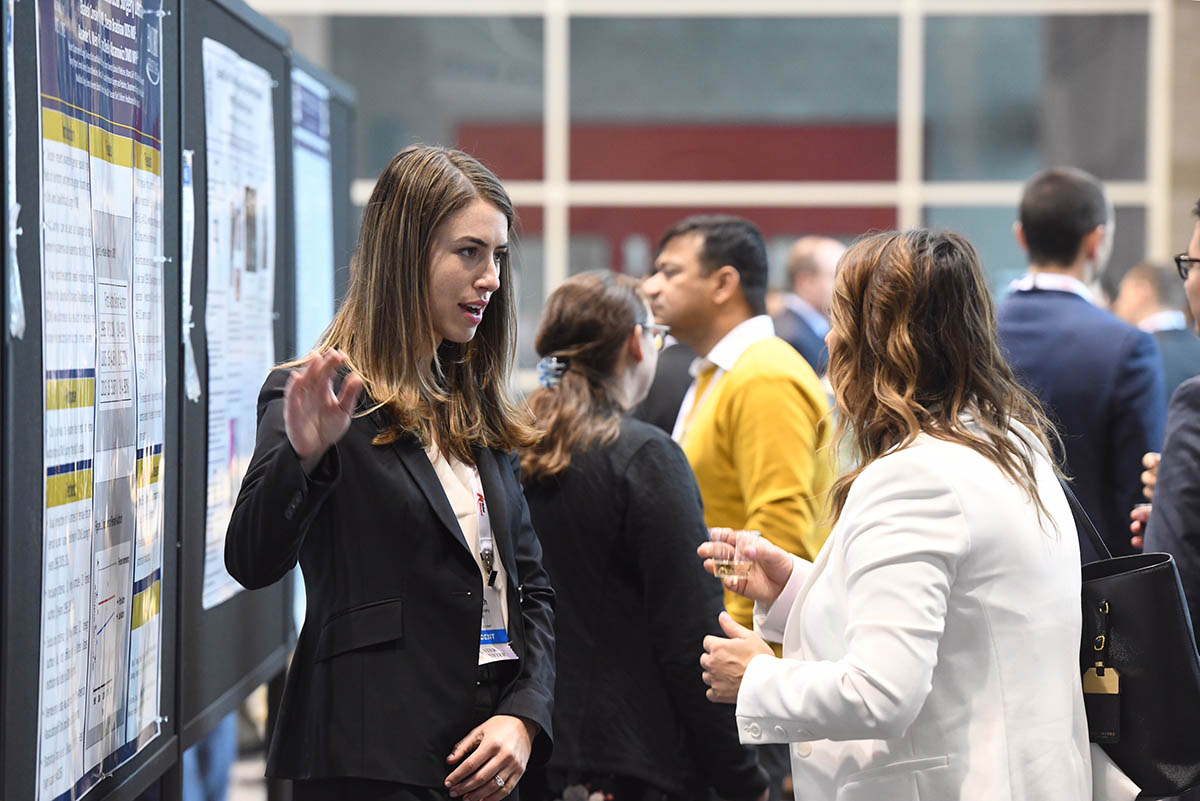 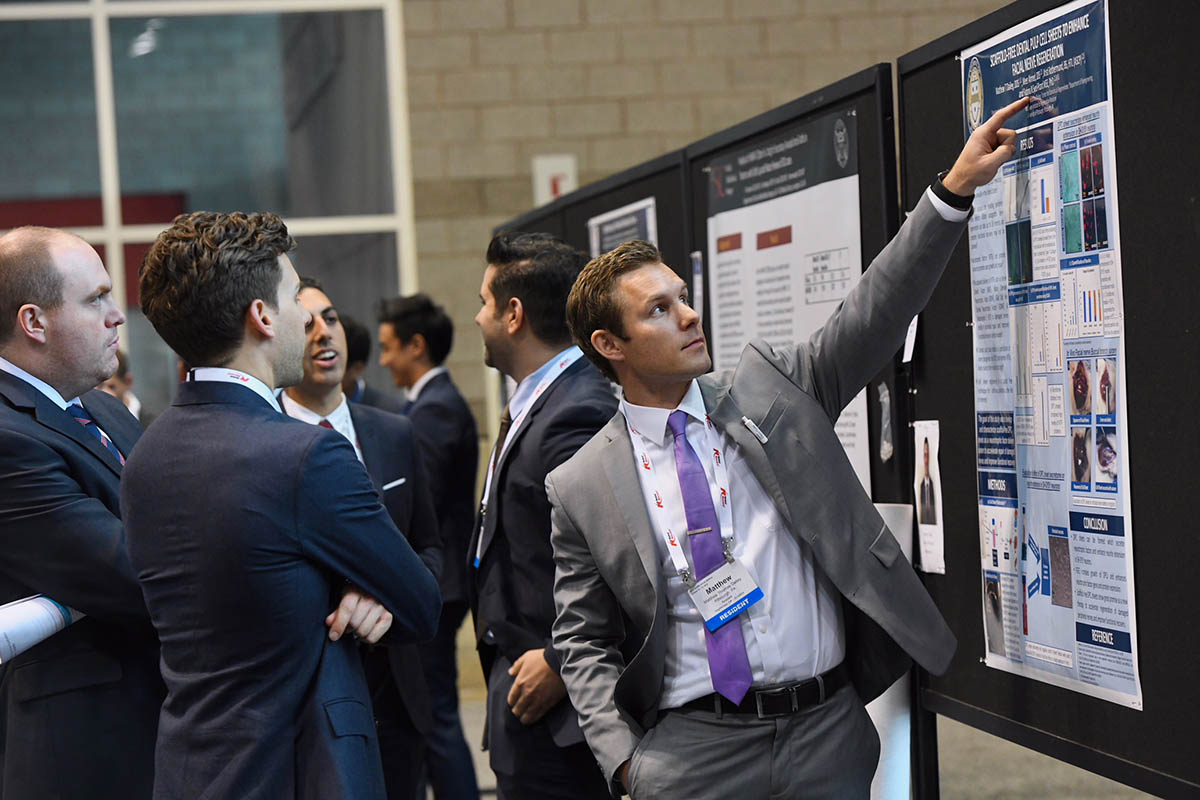 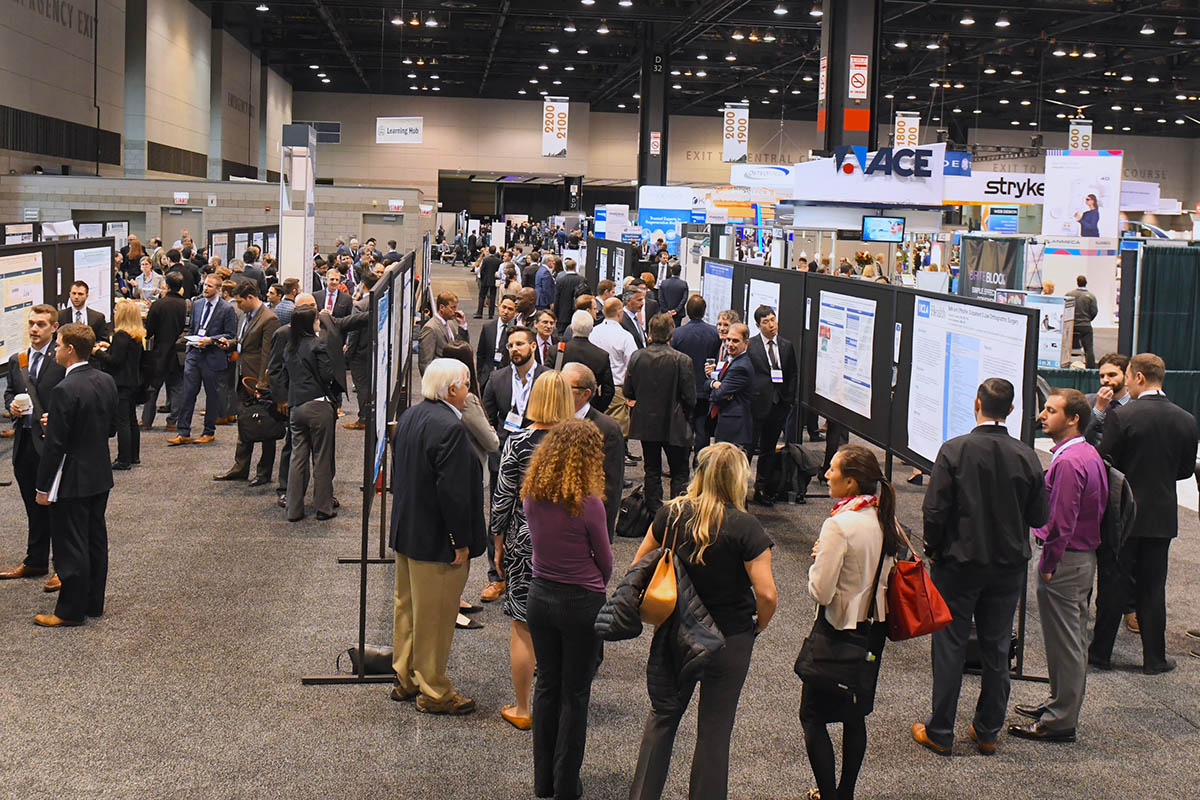 At the meeting’s busy poster session, authors talked about their work with attendees and judges in the Exhibit Hall.

The centennial reunions also continued Friday, as attendees gathered by state or district in the Exhibit Hall dining area. A large crowd convened for the complimentary lunch. On Saturday, the final day of the Annual Meeting, the reunions will focus on clinical area of interest.

“It’s one of the high points of this meeting – you see people you haven’t seen, particularly those you’ve trained with, you see where they went,” said Robert Brockett, DMD, of Crystal River, Fla., about gathering with his colleagues.

About 40 attendees gathered for an update on the American College of Surgeons on Friday morning.

Later this month, 71 OMSs are expected to be inducted in the College, bringing the total number of OMSs in the world’s largest surgical organization to 513.

The speakers reviewed the advantages of joining the College, requirements for application and AAOMS’s accomplishments, including single-degree OMSs gaining the opportunity to be inducted and the approvals of an OMS advisory council and an OMS seat on the Board of Governors.

“Every year that passes, we are getting stronger and more active and participating and contributing more in the College,” said speaker George M. Kushner, DMD, MD, FACS. “I just love to see the steady growth.” 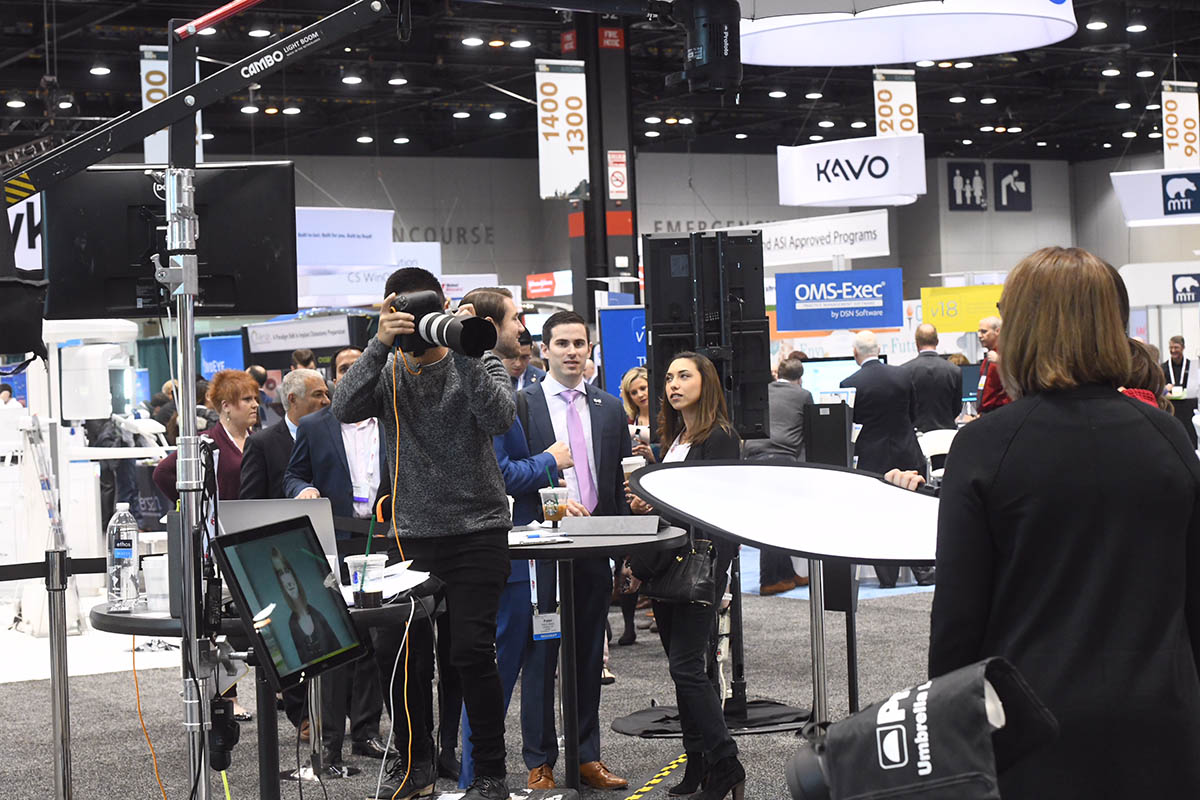 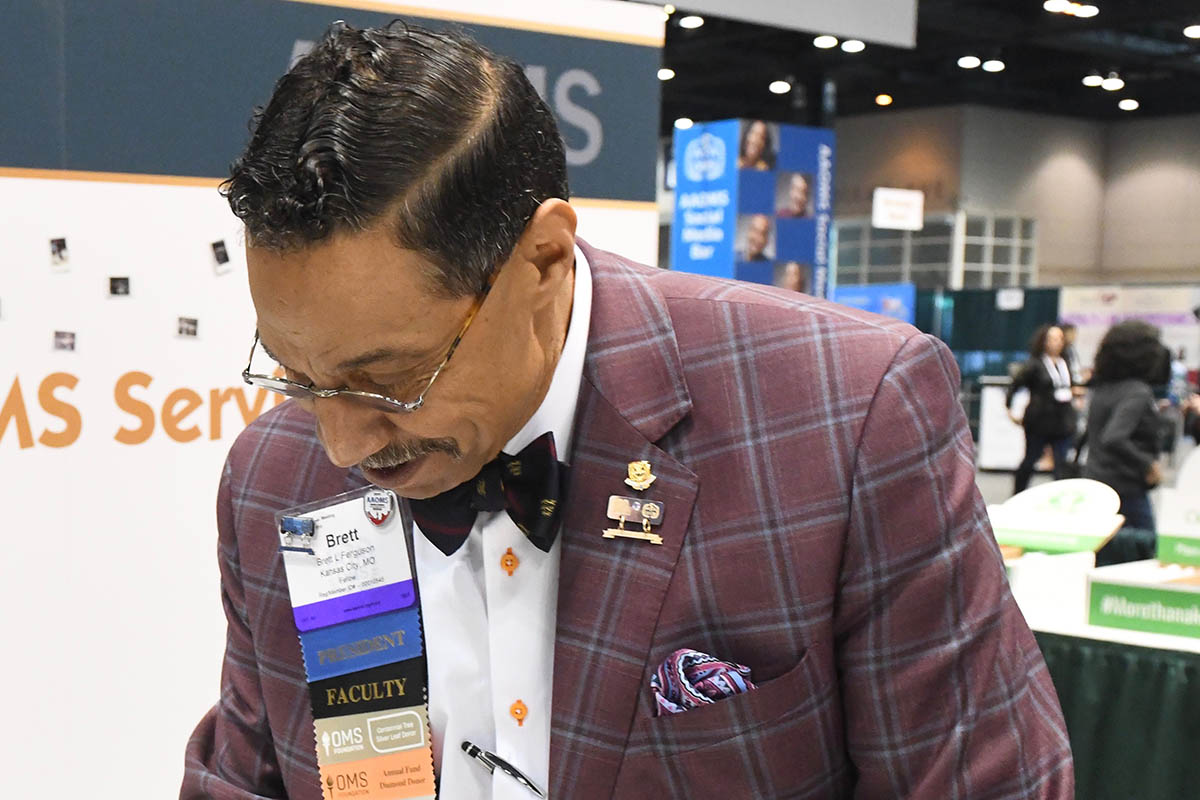 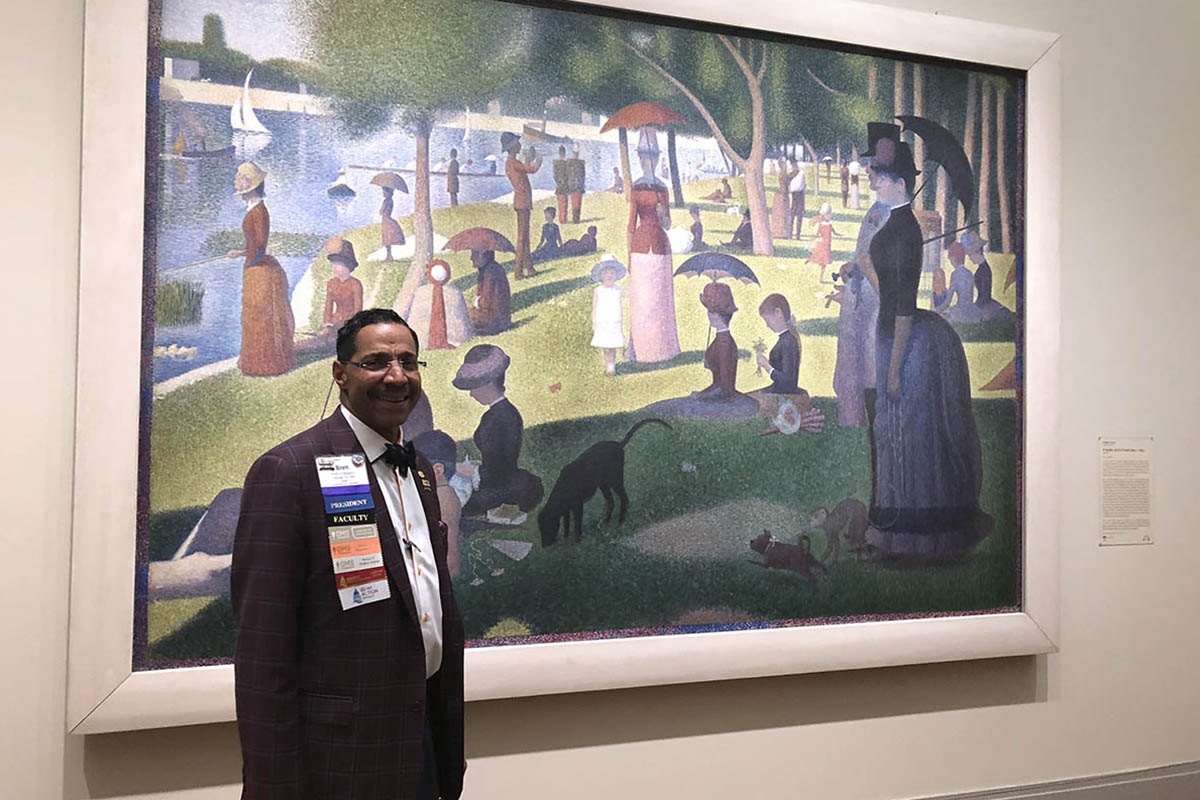 The President’s Event at the Art Institute of Chicago on Friday night honored 2017-18 President Dr. Brett L. Ferguson and his family. Attendees enjoyed food, famous artwork and music from the CoverGirls, a violinist pop/rock revue group. 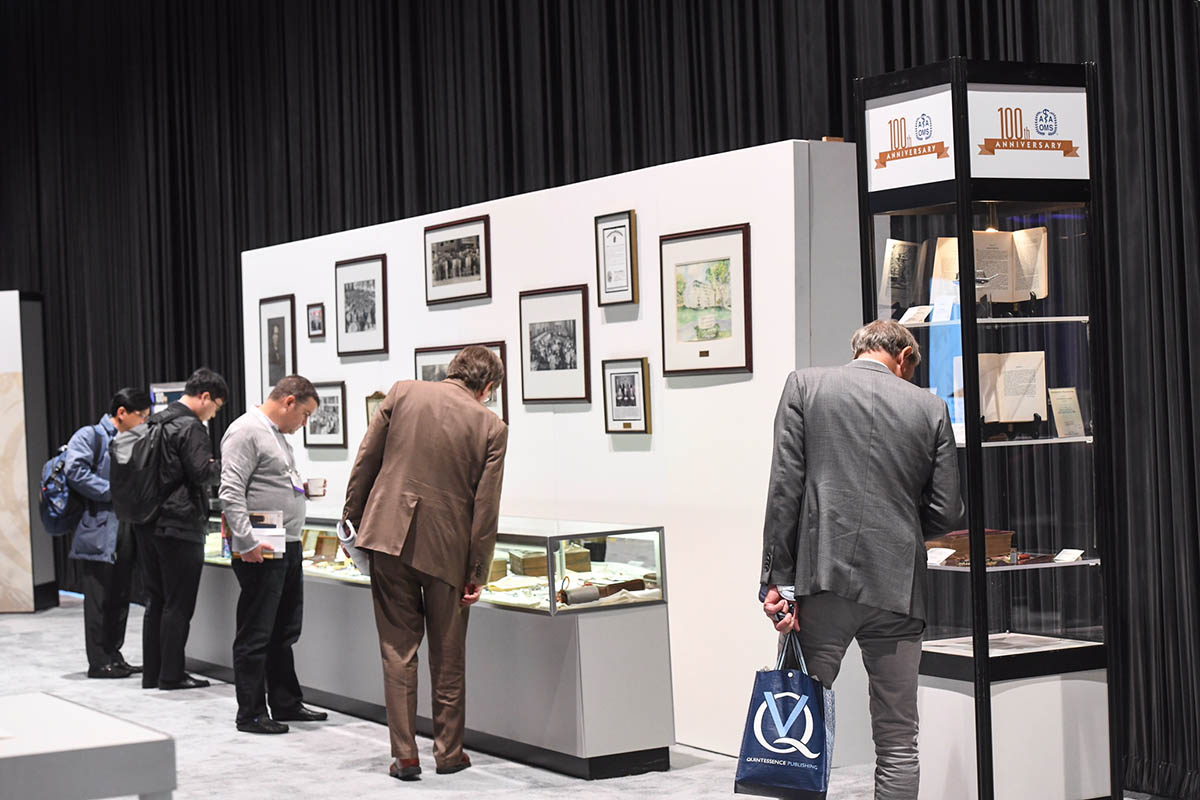 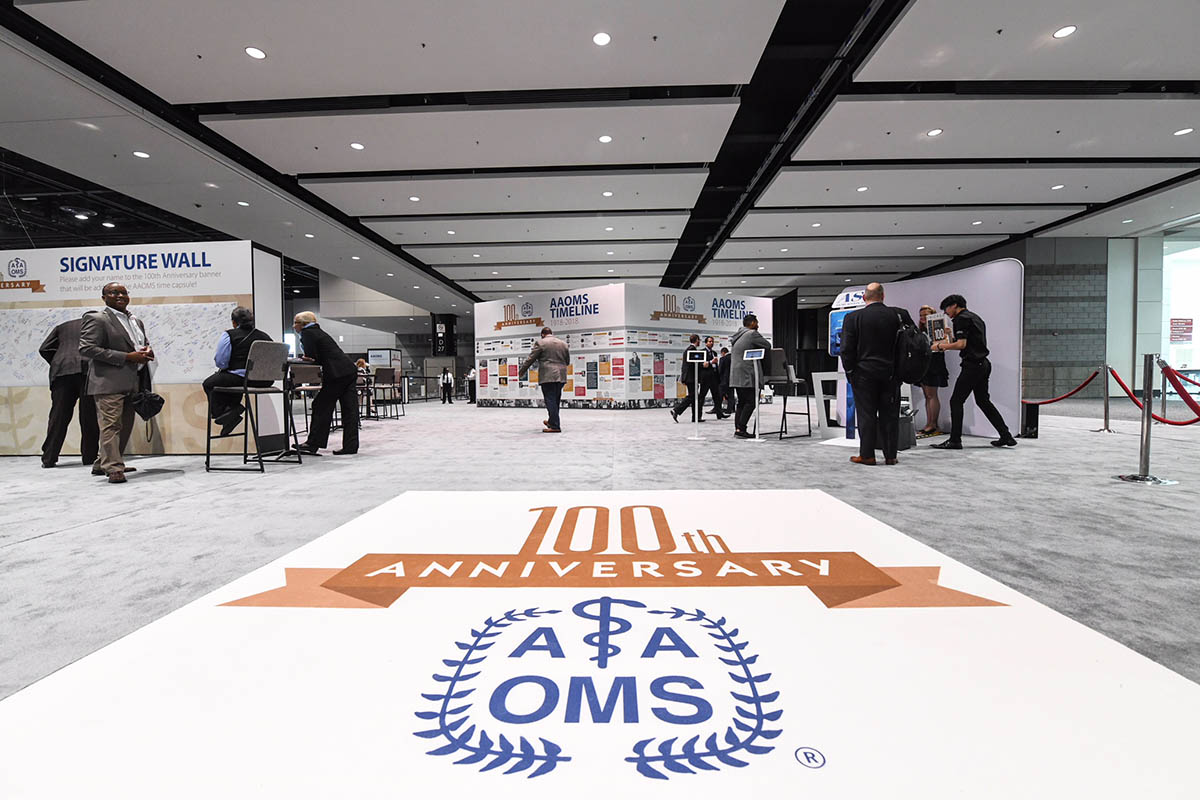 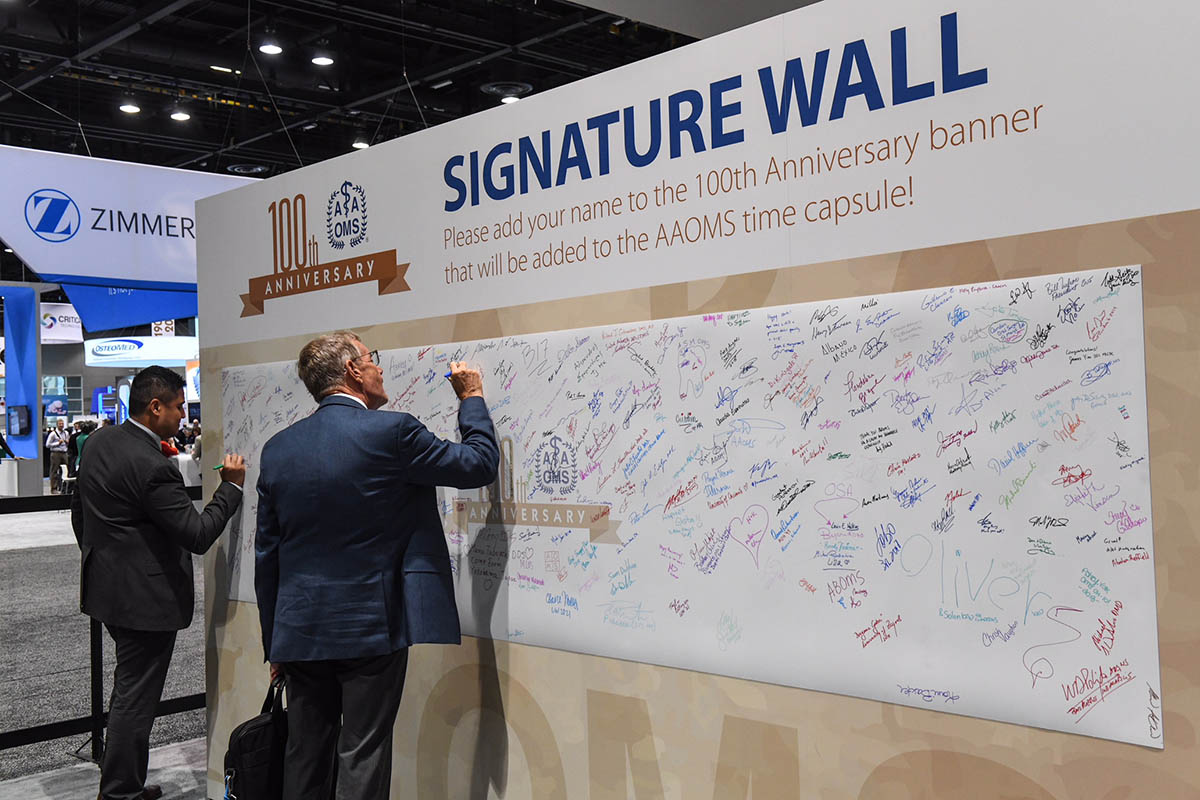 With the newly unveiled History Museum and more than 200 vendors showcasing their products and services, the Exhibit Hall opened Thursday morning at the 100th AAOMS Annual Meeting in Chicago.

In honor of the Association’s centennial, the museum featured OMS-related artifacts, a large TV playing past president interviews, a time capsule and other attractions. Attendees left their colorful signatures on a banner, read a sprawling timeline chronicling AAOMS highlights and world historical events and checked out a portrait wall of all the AAOMS presidents. Attendees perused such artifacts as the first arthroscope used to visualize the TMJ in the United States in the 1970s, a S.S. White portable dental chair and the Irby Head Frame.

“I know a lot of people are excited to see this,” said Stanley Smith, DDS, an AAOMS Delegate from New York. “There’s a lot of energy. It’s nice to see the history.”

Educational sessions on such topics as the history of residency training programs also got underway at McCormick Place West. An educational platform of nine clinical tracks based on the OMS scope of practice is debuting at the meeting. Each track featured a large plenary session before splitting into repeating breakout sessions.

History, of course, is a central theme. The pediatrics and cleft plenary session summarized advancements in surgery, remembered pioneers and peered at the future.

“Today, we’re able to do predictably well cleft lip and palate repair primarily because we’ve learned from the experience of our forefathers,” speaker Timothy A. Turvey, DDS, FACS, from the University of North Carolina, said during the plenary session.

The dental implant and cosmetic and orthognathic surgery tracks also covered the past while looking ahead.

The Annual Meeting continues Friday with more educational sessions and the continuation of the Exhibit Hall. The President’s Event at the Art Institute of Chicago will honor 2017-18 President Brett L. Ferguson, DDS, FACS. 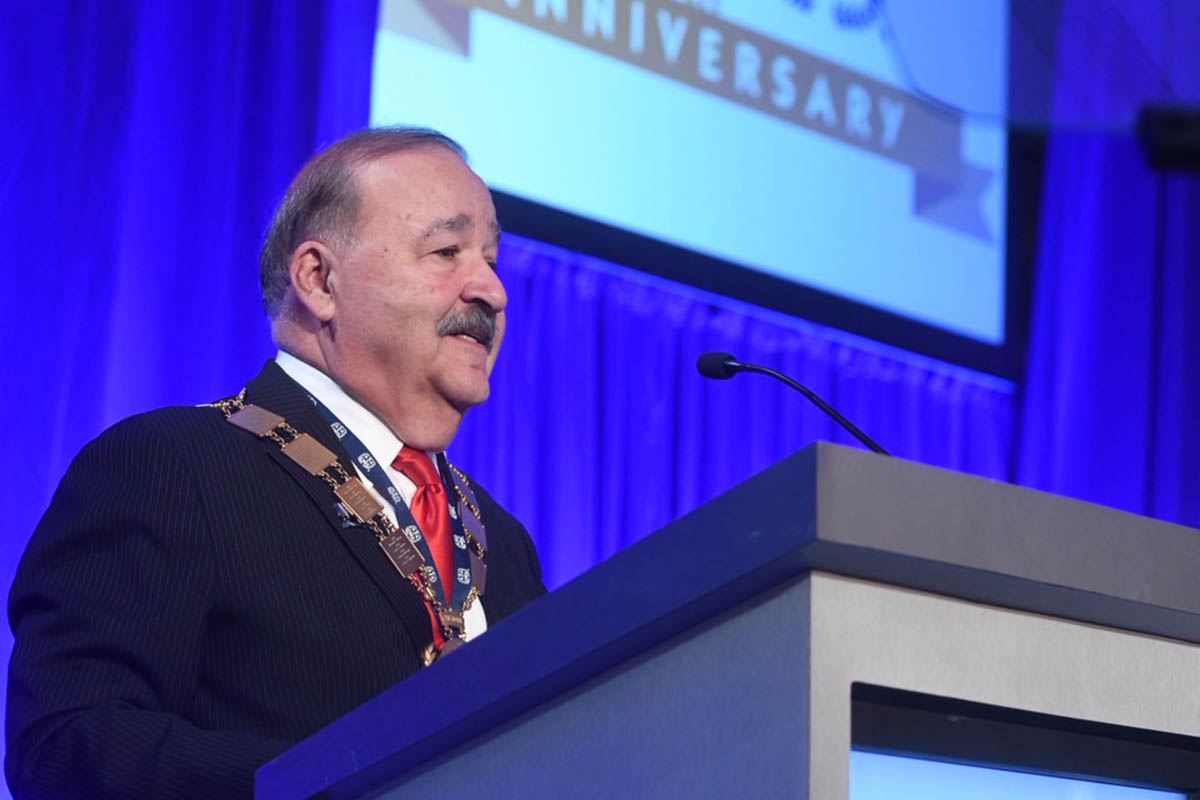 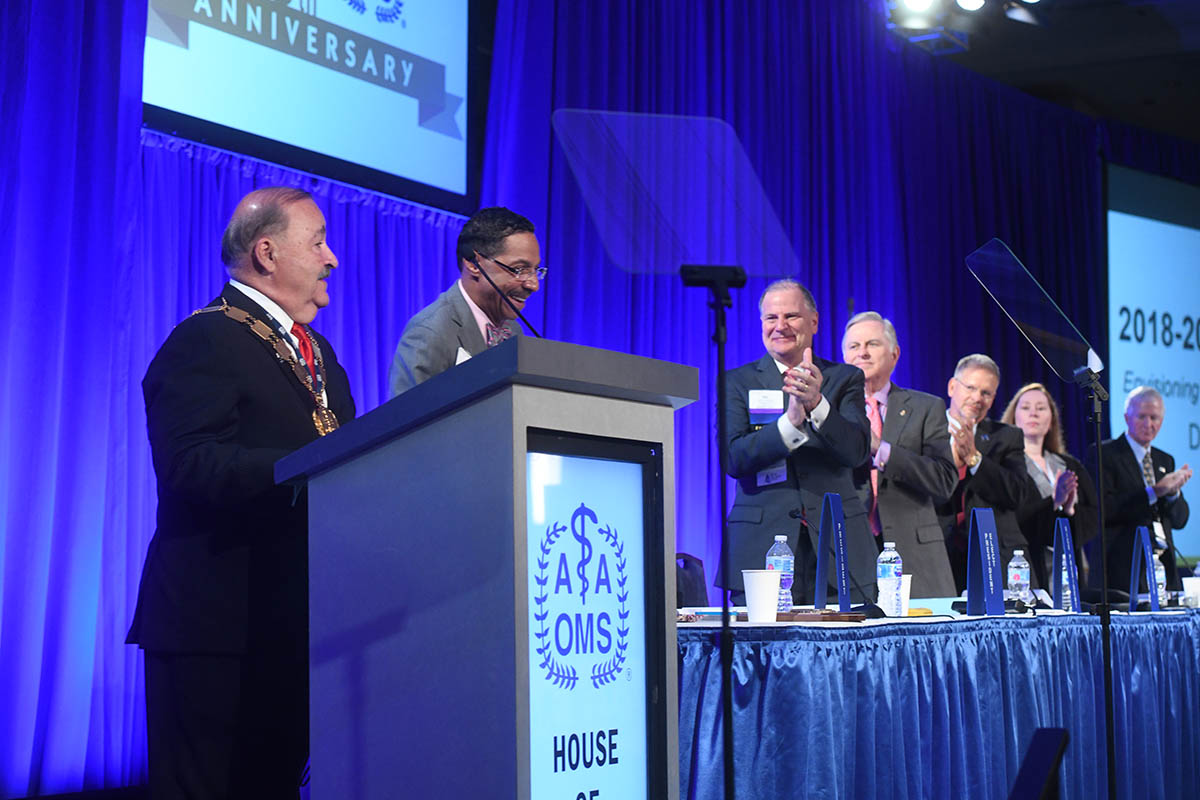 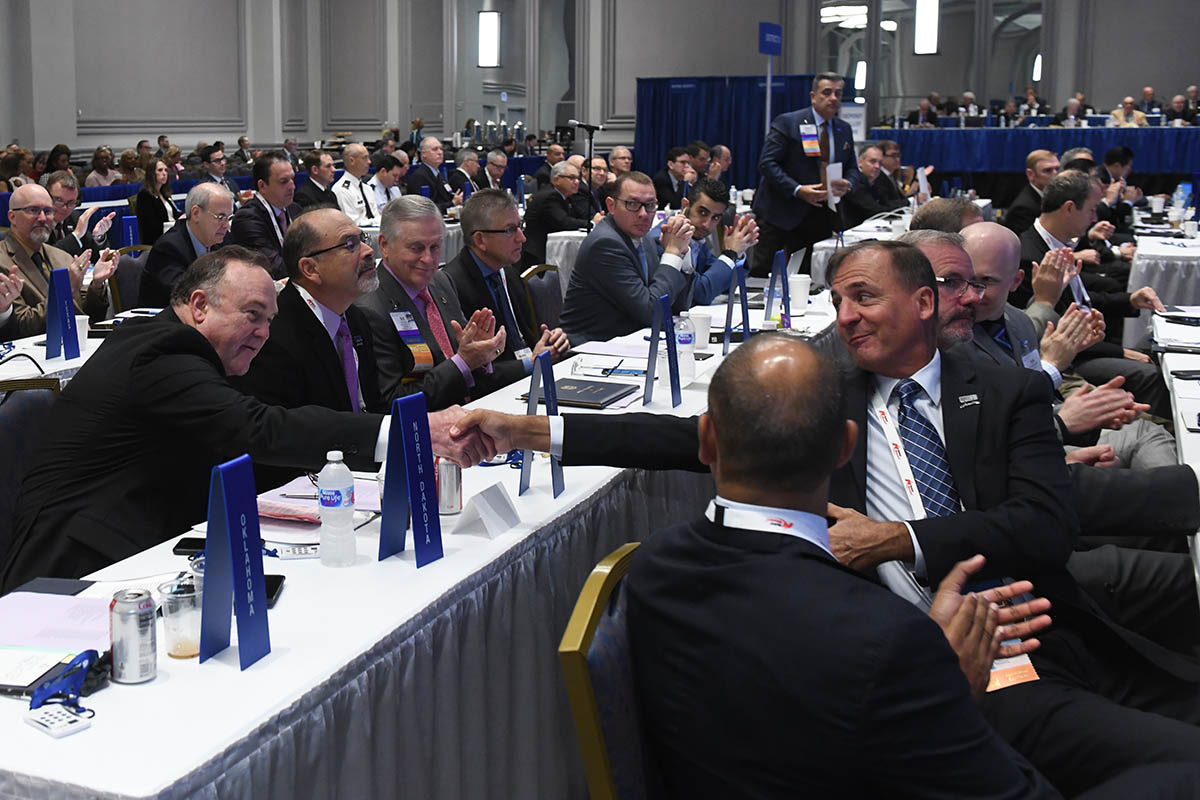 A. Thomas Indresano, DMD, FACS, outlined the strategic priorities of his presidential agenda during his inaugural address as the 2018-19 AAOMS President on Wednesday at the 100th AAOMS Annual Meeting in Chicago.

“I stand ready to begin my presidency of the American Association of Oral and Maxillofacial Surgeons after 100 great years of our organization,” Dr. Indresano said during the third session of the House of Delegates. “We have traveled so far and achieved so much for this specialty. We have forged new paths, been called on to protect our scope of practice and met challenges in the world of healthcare.”

“With those four goals presented to you, that summarizes my vision for what I know will be a busy and productive year ahead – the 101st year for AAOMS and the first year of our second century,” Dr. Indresano said. “I am humbled and honored to stand before you today.”

“My joy and pride at being selected to lead AAOMS – with the help and guidance from the House of Delegates and the Board of Trustees – was a singular achievement, and one that I will always remember as one of my life’s best moments,” Dr. Ferguson said.

Retiring Past President Dr. Douglas Fain also was recognized. He put on a cowboy hat after he left the stage, as the Delegates applauded him.

“While Doug will be physically missing from the Board Room, his impact on this great specialty will last well into the future,” Dr. Ferguson said.

In addition, the following also occurred at the House of Delegates session:

Later in the day, the 100 Years of AAOMS session helped jumpstart the historical focus of the meeting’s centennial celebration. The session covered formation of the specialty and the Association, development of the office-based anesthetic model and advances in the management of maxillofacial trauma. Evolution of orthognathic surgery, the rise of head and neck surgical oncology and reconstruction, management of craniofacial deformities and TMJ, and the history of dental implants also were addressed in the expansive session. 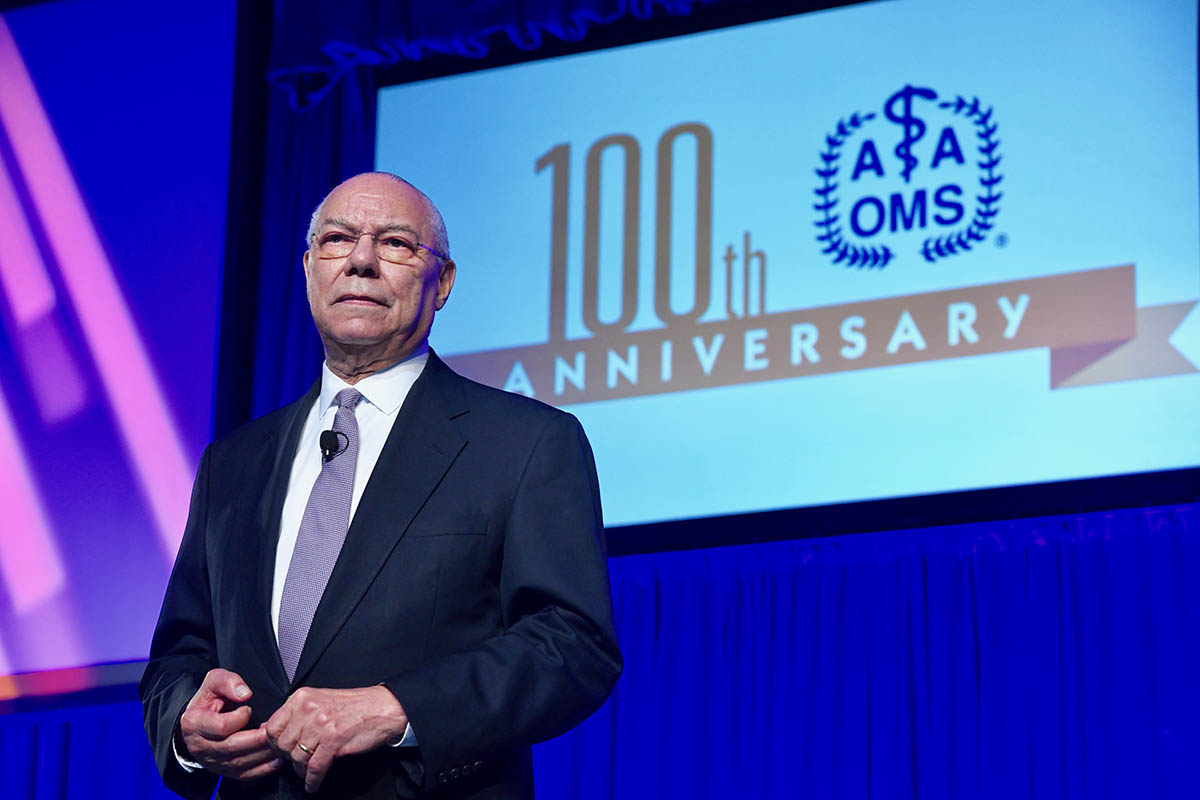 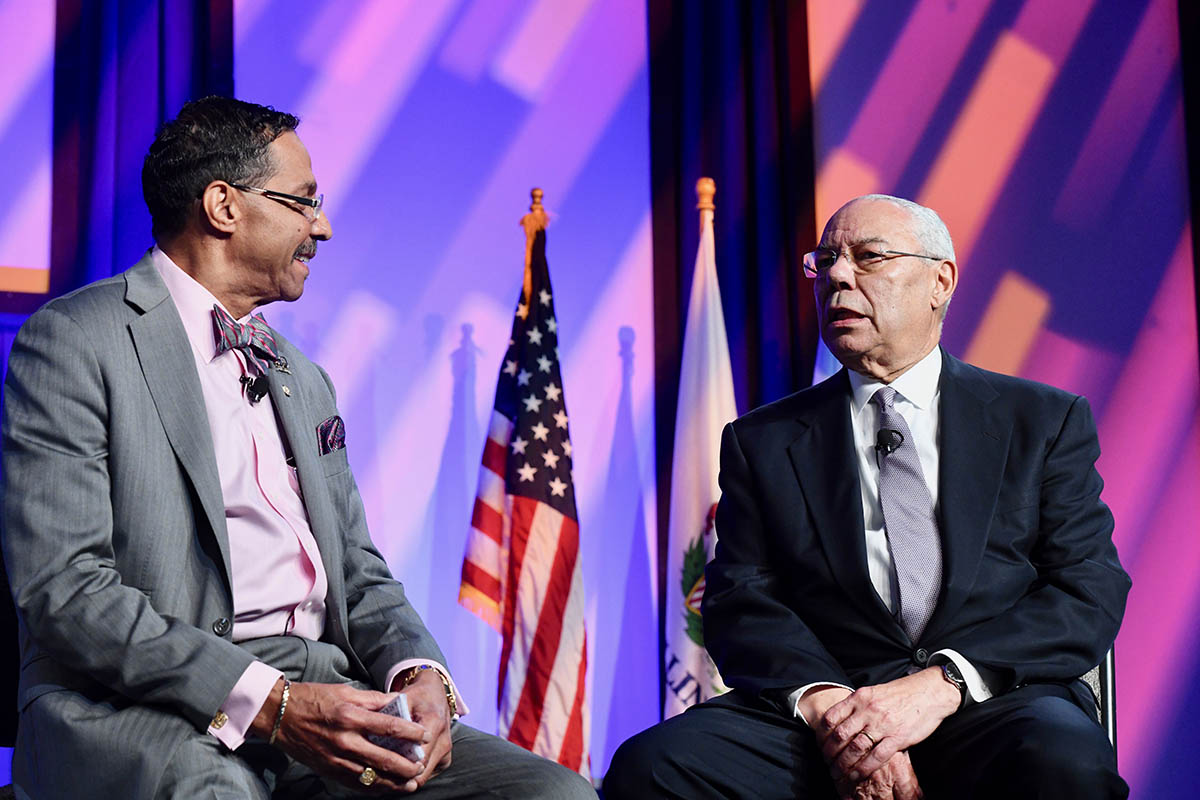 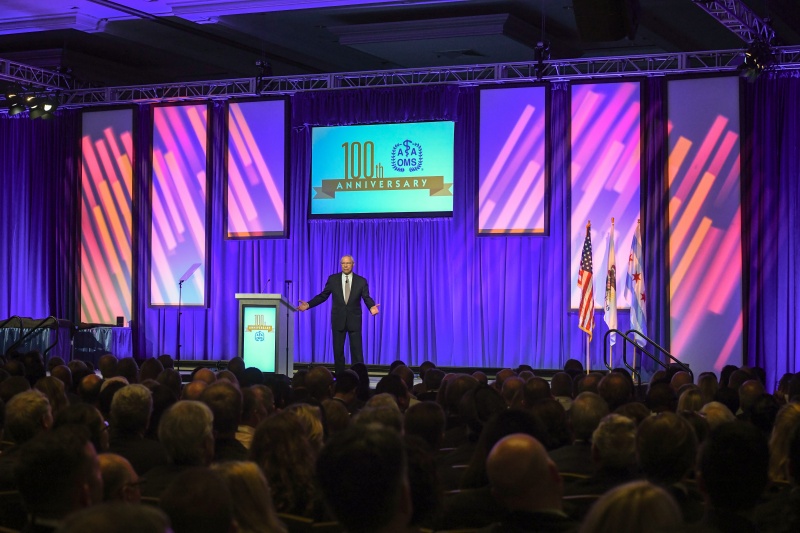 In addition, former Secretary of State and Chairman of the Joint Chiefs of Staff, General Colin L. Powell, USA (Ret.), gave the Keynote Lecture on “Leadership: Taking Charge” in a packed International Ballroom at the Hilton Chicago. 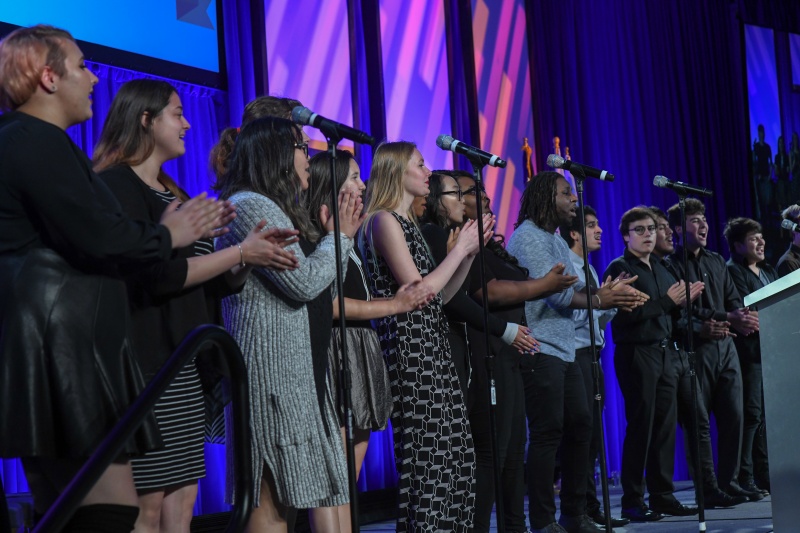 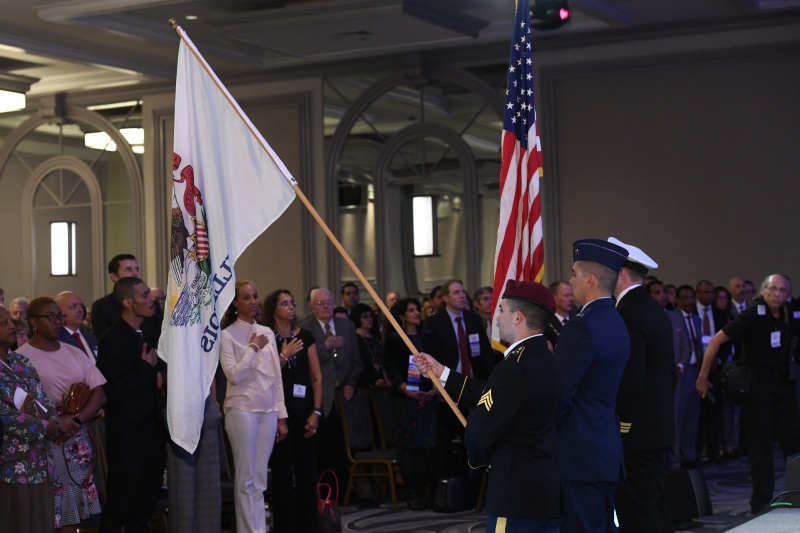 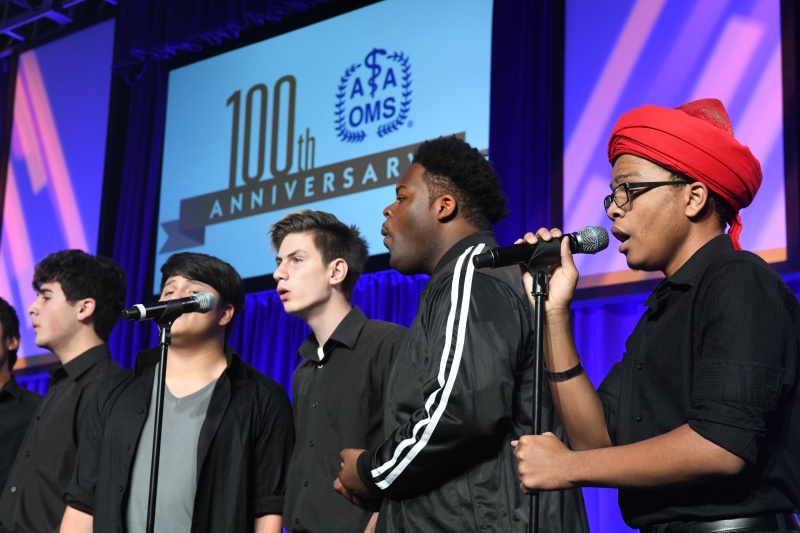 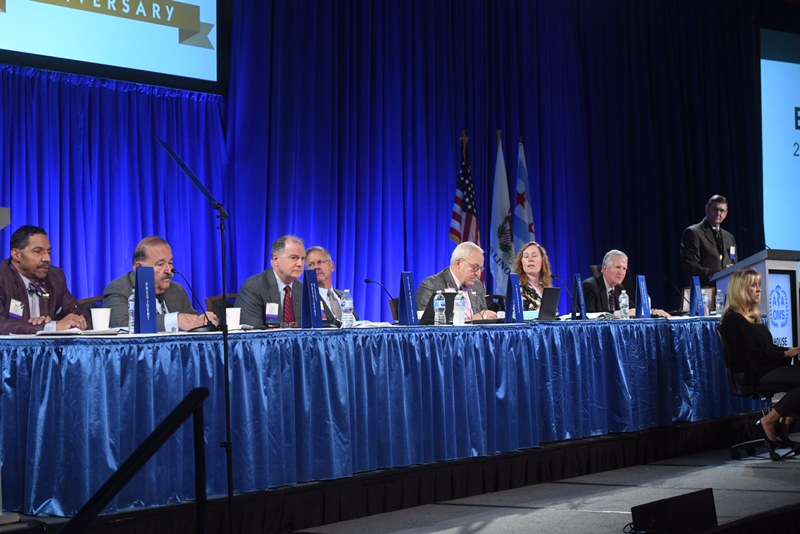 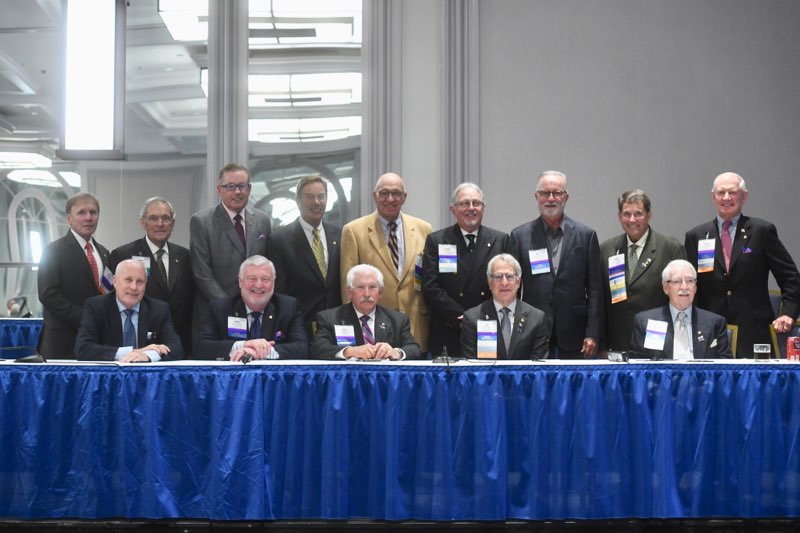 The House of Delegates approved a resolution on Tuesday at the 100th AAOMS Annual Meeting in Chicago that resolved the Association proceed at its earliest opportunity with the construction of an education/simulation center on the second floor of its headquarters building in Rosemont, Ill.

Hosting certain events at headquarters would provide cost savings and convenience, according to the resolution. More than one-fourth of the space on the second floor will become vacant at the end of the year.

In other business, the House of Delegates:

The House of Delegates’ final session will take place Wednesday, when officer elections will be held. Later in the day, former Secretary of State and Chairman of the Joint Chiefs of Staff, General Colin L. Powell, USA (Ret.), will deliver the Keynote Lecture, which will be followed by the Opening Ceremony, Awards Presentation and Meeting Dedication. 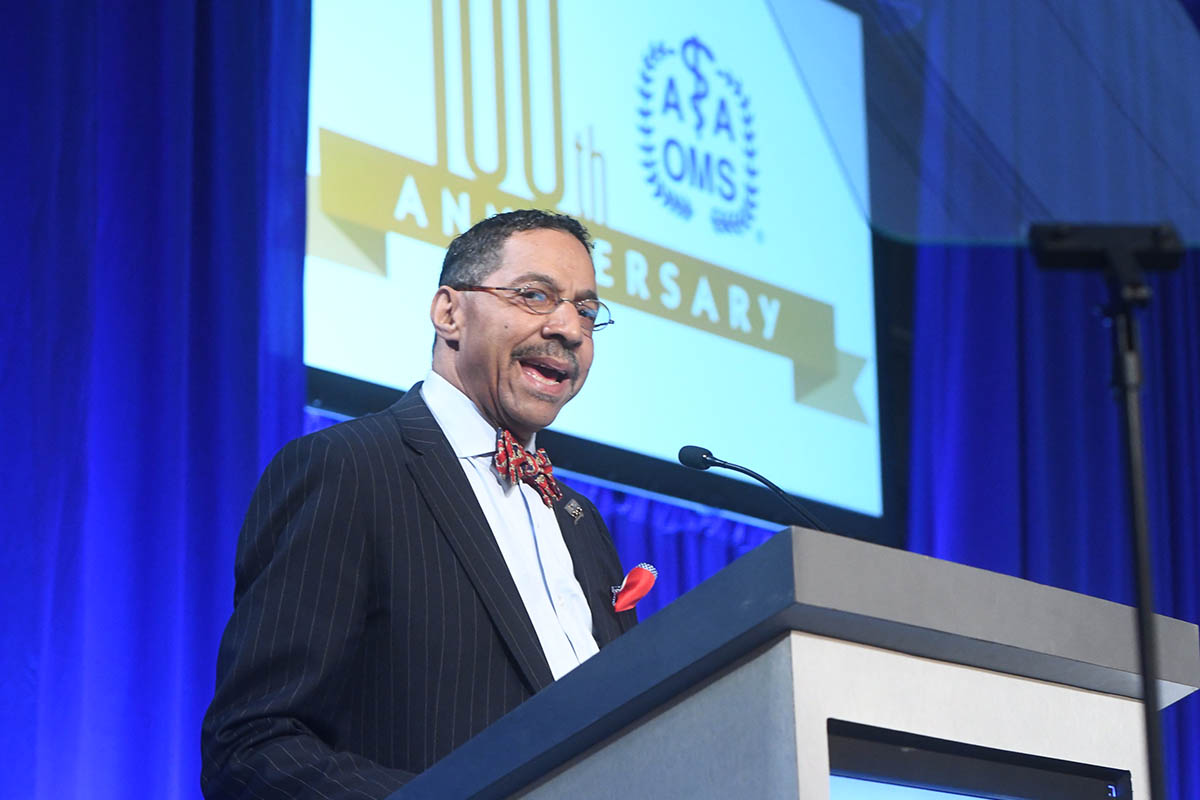 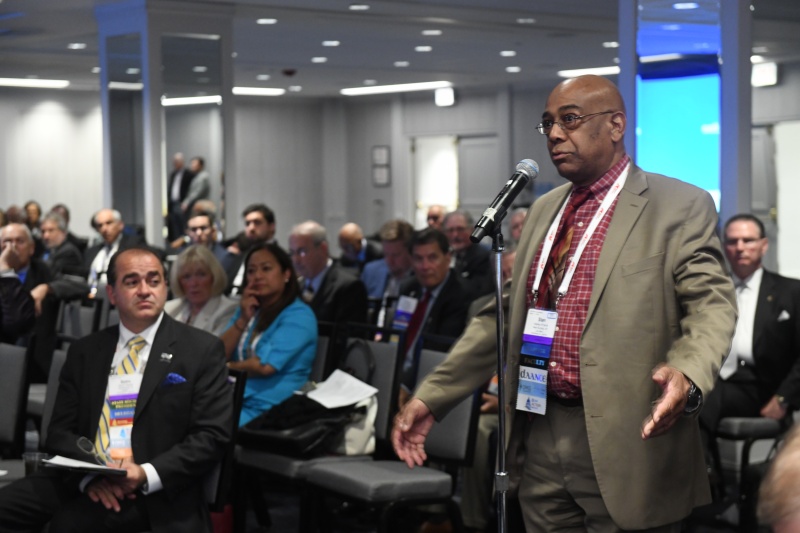 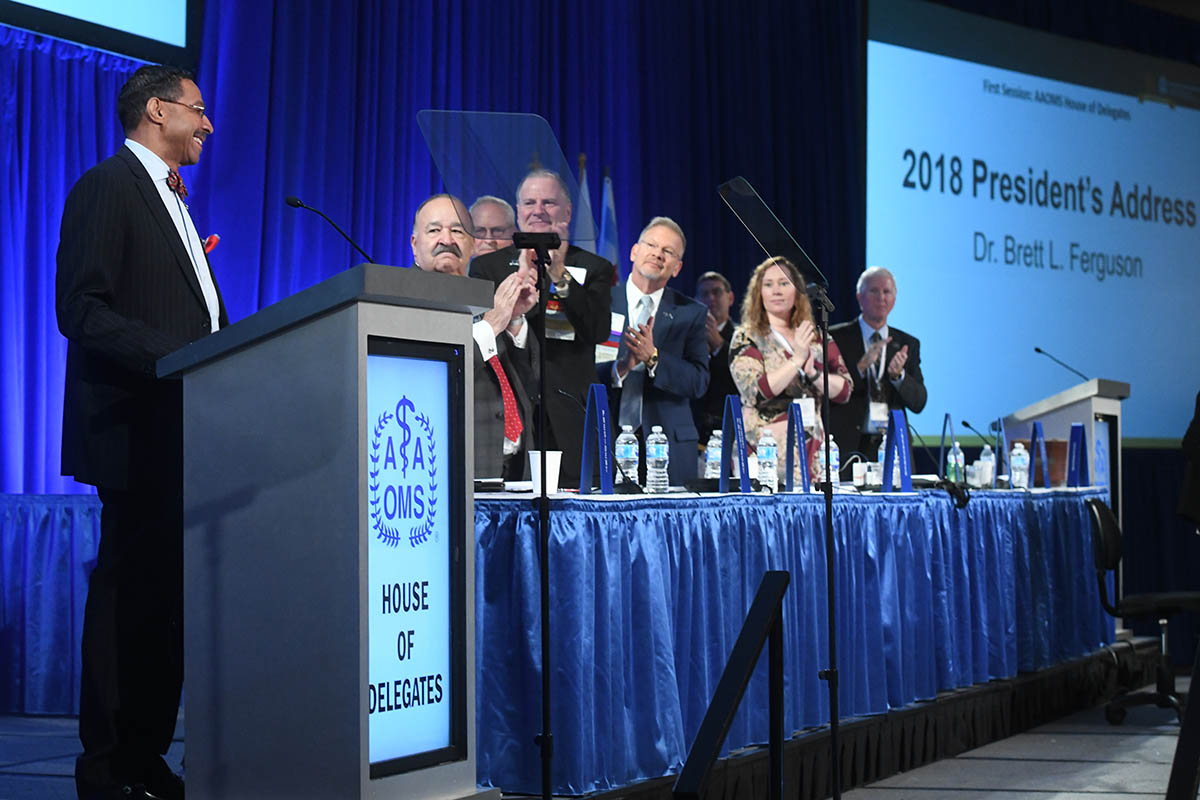 Brett L. Ferguson, DDS, FACS, delivered the President’s Address to help kick off the 100th AAOMS Annual Meeting on Monday morning in Chicago during the first session of the House of Delegates.

“It is a privilege to stand before you this morning at this historic centennial Annual Meeting and report on the activities of your Association during the past year,” Dr. Ferguson told the gathering of 102 delegates, AAOMS officers, trustees and staff at the Hilton Chicago. “I have been sincerely honored to serve in this role, see our specialty grow and make advancements on many important projects.”

Association highlights from Dr. Ferguson’s tenure as President include the American College of Surgeons approving the creation of an OMS Advisory Council as well as an OMS seat on the College’s Board of Governors, enhancing the specialty’s voice and impact in the world’s largest surgical organization. Dr. Ferguson also focused on anesthesia in the past year, as AAOMS works to preserve the OMS delivery of anesthesia through a multi-tiered approach.

The recently launched Dental Anesthesia Incident Reporting System collects and analyzes anonymous information that will be vital for patient safety and advocacy efforts. In addition, the National Simulation Program – which allows attendees to practice and master techniques and evaluate preparedness for office anesthesia emergencies – is now available to members, and the ninth edition of our Office Anesthesia Evaluation Manual is being published.

In terms of advocacy, AAOMS has found success with the permanent repeal of the Independent Physician Advisory Panel, and FSA and HSA reform and Medical Device Tax repeal both passed the House. The Ensuring Lasting Smiles Act also has been introduced in both houses. If it passes, families would have health insurance coverage for medically necessary treatments related to birth defects.

Furthermore, AAOMS played a role in reversing a Guardian insurance policy that required claims for third molars with associated IV sedation or general anesthesia to be reviewed for medical necessity.

Yet another highlight of the year was a survey found members are mindful of the opioid epidemic and are taking steps to reduce opioid prescribing.

“I am so honored and so proud to have served as your President during this centennial year,” Dr. Ferguson said.

The following business also took place during the first session of House of Delegates:

“It is my great pleasure to welcome you all to Chicago, and I’m especially honored to do so for the 100th anniversary of the American Association of Oral and Maxillofacial Surgeons,” said Dr. Spiro Karras, president of the Illinois Society of OMS. “As members of this great organization, we’re all truly blessed to be able to participate in this incredible profession. Our organization began as the American Society of Exodontists 100 years ago in this very city a mere two-and-a-half miles from here.”

During the afternoon, Delegates, alternates, fellows and members of AAOMS received clarification and shared their opinions regarding 14 resolutions and other issues during Reference Committee hearings. Presentations provided details on a proposal to create an education center at the Rosemont headquarters as well as updates on the Informational Campaign and anesthesia- and opioid-related efforts.

The second and third sessions of the House of Delegates take place Tuesday and Wednesday as the Annual Meeting continues.

We'll be sharing highlights and images from the #AAOMS2018 annual meeting. Check back daily to see what's happening! 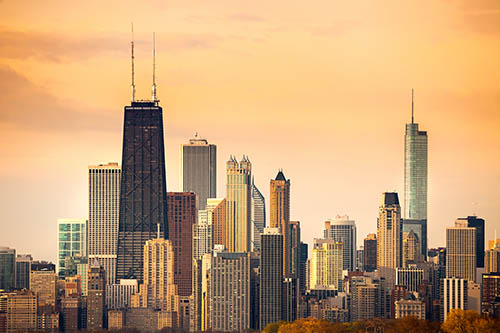